Maybe some of you remember this quilt…. 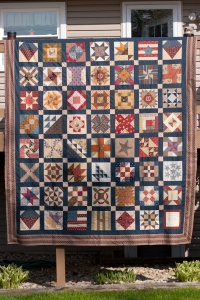 This is my Civil War tribute quilt that I was too cowardly to quilt myself.  My fmq skills were nowhere near where they needed to be to wrestle with this guy.  Besides, I just wasn’t confident enough to tackle it no matter what size it was!  I cried “Uncle” and decided to have it quilted by a local long arm quilter.

I was pretty nervous about leaving my “baby”.  I felt like I did when I left my son at college for the first time.  (Although I don’t think I had to worry about my quilt walking on the wild side!)  I was apprehensive to say the least.

One of the biggest reasons I did not quilt this myself is that I’m design challenged when it comes to quilting.  I never know how to begin…I never know where to put which motifs…or if I should put a motif at all!  That’s why I end up stippling or meandering or some such thing.  I feel it’s better to wander than to have to live with botched florals for all eternity!  I looked at that quilt and I had  no idea what to do with it.  So I put myself on the waiting list for the long arm quilter.

The day finally came when I was to take my baby to camp and leave it.  I “dethreaded” it, pressed it, pressed the backing, hung it on a hanger and left for the quilter.  When I arrived at her house she asked me about how I would like it quilted.  I told her I had no idea.  She spread the quilt out and looked at it and ran her hands over it and started to tell me how she would quilt it.  I was stunned when she finished…it was exactly what I wanted…except I didn’t know it until she told me!  It was like the quilt told her how it should be finished.  I’ve seen shows on television about dog whispers and horse whisperers.  I think she must be a quilt whisperer! ( Wouldn’t that be an awesome show!)

Here’s the sort of finished product.  Sort of finished because it still needs the binding.  And I think I’ve documented pretty well just how much Ilove to attach binding.  But it will be finished soon…our guild’s show is early October.

Each block is quilted individually with designs where they were appropriate….some with feathers, some not.  There’s a viney, leafy design in the sashing and the border is quilted with straight lines to give the illusion of a pieced border.  She used three thread colors….something I wouldn’t do…I have enough trouble using one!  She thought that the thread shouldn’t overpower the blocks.  I liked the subtlety of that.

27 thoughts on “The quilt whisperer…”