…when you’re having fun.  Or supposed to be!

After getting through Thanksgiving with little or no drama–no dropped pies or turkeys that didn’t cook–decorating for Christmas should be  a piece of cake.

It’s a tradition (or a curse–not sure which) to decorate the weekend of Thanksgiving.  Since this was Mr. Christmas’ (aka my husband) first post-retirement Christmas, decorating should be a snap this year!  Or not…   It’s well documented that when we decorate, the rest of the family scatters to the four winds.  No one wants to be around when the battles begin.  Getting  a pre-lit tree has helped tremendously in curtailing the not so festive words that would fly around the tree trying to get the lights wrapped around the branches just right.  And, yeah, those nuggets came from me.  Mr. C was always too busy having a holly, jolly Christmas.  No holly, jolly for me until the decorating is done.

This year we were getting an early start–a whole day early.  Maybe this wouldn’t be a lost weekend after all!  Step One…assemble the tree.  You know, as they say, it’s all fun and games until someone gets hurt….or the tree falls over.  Yep, our tree decided to keel over.  The “trunk” bent and we watched it fall like a giant redwood in our living room.  Mr. C decided to just bend the trunk back the other way and it should be good to go for one more year.  Oh yeah…that worked…for about 60 seconds.  Tim-ber!!  It came down again.  Two choices…tie it to the window locks or buy a new one.  We had a tree that had to be tied up back in the day.  Even though we tried to make it look festive by tying it with red ribbon, the bottom line was it just looked tacky.  So, off to the store we went.  By this time Mr. C was no longer holly, jolly and since I wasn’t to begin with, you can imagine the mood in the car.  Add to that a little thing we call “Black Friday” and I think you know where this went!

The store was not very crowded–grateful for that.  They were also not very cheap.  If I need to buy a new tree I’m the day after Christmas bargain hunter, so I was stunned by the prices.  Narrowed it down to two and couldn’t decide–should I go cheap or go pretty?  Mr. C reminded me that we weren’t buying a house …just a Christmas tree.  PICK ONE!!  OK…so I went with pretty.

Later on that evening, MiniQuilter and MarioFan came by to “help” decorate the tree.  I’ll admit to being a little bit particular with ornament placement.  It comes naturally—my grandmother was the queen of the ornament placers!  I had to keep reminding myself that in a couple of years they won’t want to help decorate and I”ll be sad.  But WHY do kids find the butt-ugly ornaments–the ones you just can’t bring  yourself to toss out for whatever reason–and put them right in the front of the tree?

Right in the front where i have to look at it every time I pass by!  Is it a kid thing? 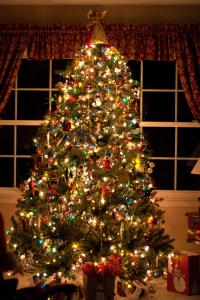 But when it was all said and done the tree was pretty and it was finished in one day.  Sitting on the couch with a glass of wine and Mr. Christmas with a beer, it looked pretty and festive.

Which gave me all day Sunday to sew.  I had made a baby quilt for the granddaughter of a good friend.  It’s an I Spy quilt.  Picked up the kit for $7–all cut out and ready to go.  Pieced it quickly and it looked cute.  I decided that since I had a poly batt, I’d use that.  After I started to stitch-in-the-ditch, I remembered why I don’t use poly.  I like flat quilts and this had too  much loft  for me.  Too late to change horses now.  So I plugged along.  I did some nice swirlies in the border–several times.  I had to “unsew” and resew because the backing folded over and was caught in the stitching.  I don’t know how many times I have to do this before I learn.  Apparently…several!

My favorite part not) of quiltmaking was up next…the binding.  It actually went on pretty well for a change.  But I have lots of trouble with mitered corners.  Mine do not look nice. 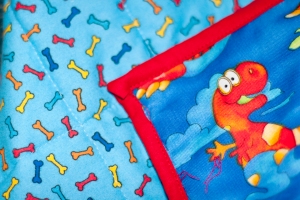 Maybe it’s practice..maybe it’s me.  I just know I’m not happy with the results.  So I walked away from it and came back to it later.  It didn’t look so bad.  The baby won’t my mistakes.  And I don’t think his mom will either! 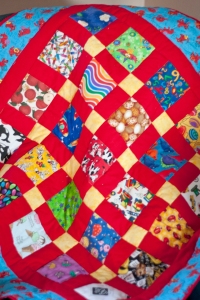 Still gearing up for Barbie…   🙂